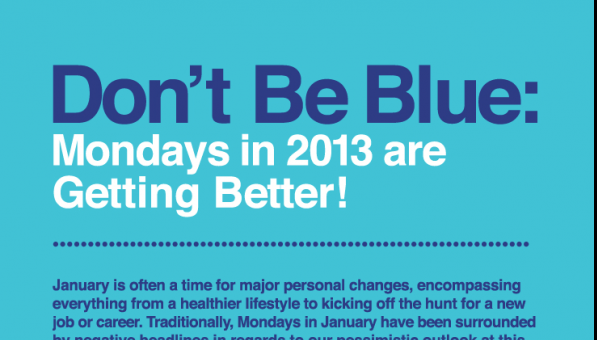 Mondays Are Looking Up! #INFOGRAPHIC

Nobody likes Mondays, right? Well, actually it looks as though the Mondays of 2013 are getting much better! In fact, according to this infographic from Visual.ly and REED, 59 percent of people are currently ‘satisfied’ or ‘very satisfied’ with their job. While that percentage could stand to be much larger, the statistic still offers a sense of optimism for our job market today. At the same time it looks as though more people are secure in their position than they were previously. This past year in 2012 26 percent of people felt insecure in their jobs while in 2011 it was 29 percent that felt the same. It’s a small percentage drop, but it shows that things are slowly improving.

Even better is the fact that companies are more willing this year to invest in their employees. Last year, staff entertainment and whole-team parties increased by 7.5 percent from the previous year. Furthermore, bonuses rose by 6.2 percent. This is great news for employees all over and is sure to make Mondays a bit better. Take a look at the infographic below to see what statistics are working towards making Monday a better day of the week.