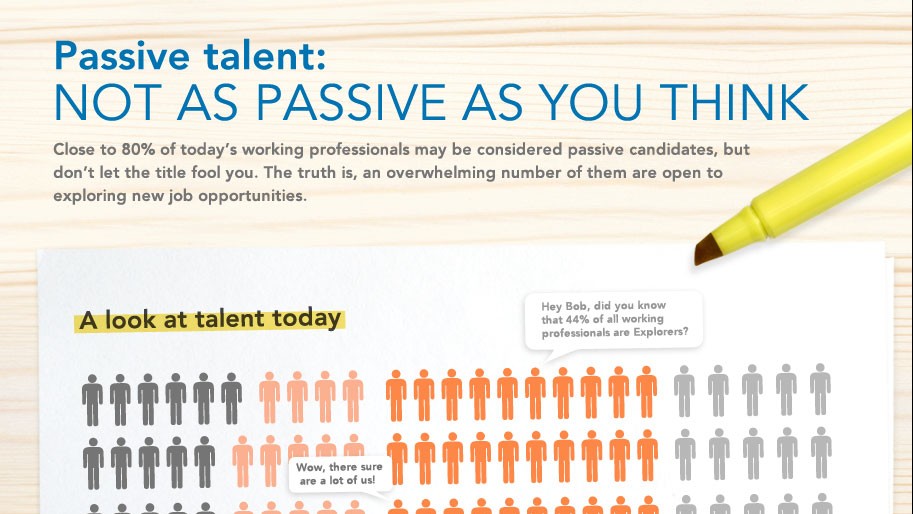 Categories of Passive Employees: How Passive Are They Really?

As previously discussed on this blog, a passive employee is one that, while not currently seeking new employment, is open to a new opportunity. This pool of passive employees is considered to be large, with almost 80% of today’s working professionals falling under the broad term of “passive” job seekers. For recruiters, passive employees are both a great candidate pool and a difficult resource to tap.

This infographic found on LinkedIn (full size below) breaks down the pool of employees considered to be passive. Turns out, passive employees are not quite as passive as one might think. The infographic simultaneously categorizes passive candidates and shows what opportunities could be available to recruiters.

Based on definitions from research by Lou Adler, founder and CEO of The Adler Group, the infographic breaks passive candidates down into “tiptoers,” “explorers,” and “super passive” categories. The data here reveals that the majority of those currently employed, about 44%, fall under the “explorers” category, or are people who are willing to be approached about a new job though they are not actively seeking one. To a lesser extent there are employed individuals considering a career change and only reaching out to those close to them with the idea. These “tiptoers” however, about 15% of those studied, are equally approachable if a recruiter or hiring manager was seeking a new pool of candidates.

These numbers should be encouraging to recruiters, because it means that the majority of employed individuals are willing to listen to a new opportunity. Even those who have been on the job for less than a year show overwhelmingly that they would be willing to have a discussion with a recruiter (47%). However, while these individuals are probably interested in listening, they’ll most likely need a highly convincing argument to persuade them to move from their current company to your own. A passive candidate has more room to be selective when considering a new offer.

LinkedIn suggests in the infographic some advice that is reiterated by many. Foremost, it is imperative to know what a passive candidate is looking for when asking them to leave the comfort of their current job. For many recruiters, the key to this is to listen well and then show them an offer that would fulfill their wishes. And if a candidate turns you down on the first try, it behooves recruiters to stay in touch. This could be through periodic emails or phone calls, via any number of social media sites, or through any other avenue that keeps you on their radar.

How would you differentiate between super passive, explorer, or tiptoers? What has proved successful when trying to recruit them? Let us know in the comments below!

Kailyn is a recent college graduate with degrees in English and Political Science. She is currently working in the publishing industry, where she loves the fact that she is paid to immerse herself in talking and thinking about books all day long. When she isn’t working, she enjoys reading, cooking, line-dancing, and writing short stories and poetry. Her sincerest hope for contributing to Spark Hire’s job seeker blog is to provide job seekers of all ages with the tools and sense of humor necessary to stay calm and carry on.

For obvious reasons, the job market ebbs and wanes through ups and downs in the economy. It’s unavoidable and not always predictable, but it’s something you always need to be prepared for as a recruiter. Often, during a...

8 Best Recruitment Strategies You Should Be Using

Nowadays, top talent has more openings for work to look over than ever. For recruiters, this means finding and contracting qualified candidates is pretty difficult.  In the competitor-driven staffing industry...